Redemption is A Pink Chair with a Floral Seat Cover.

I guess she was only doing the natural thing. How many times had she been in the car, when we stopped at a pile of junk in front of some building to look for something that seemed “interesting?” The three old wardrobes (two of which we have passed on to friends or family), tables, fold up chairs, old wood, stools and even picture frames are now a part of our home ensemble thanks to a habit both Jan and I have picked up from our parents: scavenging! Don’t anybody get grossed out, we don’t go through people’s garbage cans, just the bulky furniture and old “stuff” that people don’t want or need anymore. What in the states would probably be a sure sign someone had been evicted, is called “Sperrmüll” here in Germany. We clean out our basement about once a year, call the city’s waste management department and make an appointment for our stuff to be picked up. We then organize it into very tidy piles of metal, wood, and plastic the night before. The pile usually inspires the neighbors to do a bit of spring cleaning themselves, and so the pile grows (and then inevitably shrinks a little again) by morning.

One day this past spring, Christa, my then 7 year old, still 2nd grader, comes home to tell me that she passed by one of these piles on her way home from school. “There are some chairs.” I “should go check them out.” I guess I was really busy that afternoon, because I didn’t squeeze in even a few minutes for my compulsive hobby, wasn’t swept away by the usual fantasy flow, that maybe someone, unbeknownst to them, was throwing away a valuable retro-designer piece. Next afternoon my then 7 year old, still in 2nd grade, with a heavy school bag on her back, on an unusually warm day, comes home carrying one of these chairs! 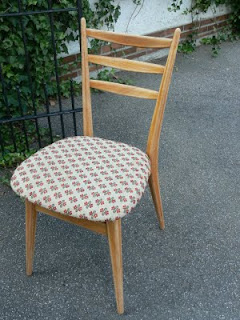 If I had fallen in love with the chair, I would have rushed out and retrieved the other three, but I didn’t. Realizing what Christa had done, however, I knew that I was going to have to get creative with this chair. My little dumpstering daughter was just too adorable. Of course I took my time getting around to the project, so it wasn’t until months later, once we got back from our summer vacation in England and still had lots of good weather for working outside, that I got to work filling out the dents, sanding, spray painting, removing the nasty layers of fabric and then covering the seat with a fresh new, but retro floral fabric from Ikea. The neighbors were intrigued. I love the chair now, and regret that I didn’t go back to get the other three when I had the chance. 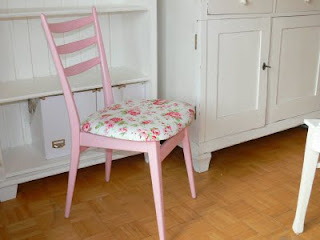 What took one sentence to describe, tho, took hours and hours to actually do. Our “new,” “free” chair wasn’t free at all. The swath of new fabric wasn’t costly, but the two cans of spray paint weren’t cheap, and if I would charge a decent hourly rate (a local charges 30€ an hour), few could afford to buy the chair for the amount I would feel obliged to write on a price tag. One could say, that a chair which had lost all of what value it might have once had for its original or previous owner, has become priceless to its new owner (me) primarily because of her own attitude and actions toward the afore mentioned furniture. This activity of making a renewed, creative and significant investment in an object, a system or a person, so as to reclaim its lost or inherent value, or uncover its possible/potential value is what I call Redemption. It is one of the most beautiful words in the English language, an immensely profound reality, a “deep magic” existing since even before the foundations of the world. Redemption is the ultimate joker; it’s the ace up a sleeve. I feel mischievous, almost cunning, when I have succeeded in turning something found on a garbage pile into something beautiful and functional, like I’ve circumvented some ubiquitous consumer principle; outwitted the odious constricting tentacles of decay, deterioration, and yes, even death itself.

The Redemption Reality offers us a way to view not only broken and unwanted things, but broken and unwanted people, broken relationships, dysfunctional systems and miserable circumstances. For a Redeemer, each is a challenge to be creative, make a significant and personal investment and cheekily break the rules of death and decay in order to make something beautiful and of immeasurable value. In this vein, beauty truly is in the eye of the Redeemer. I am immensely pleased that my daughter seems to already be infected with this kind of foresight.

i am vey moved by this picture and think it is a great way to describe redemption...

I like this blog so much. It's so true how you compare your chair with the redemption we can get. Since I'm a "Sperrmülljäger" as well it touchs really my heart. Thanks.