Let's Talk About Guns, Part I 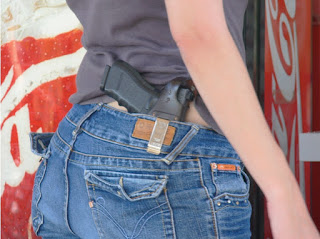 Semantics, a Personal History, and a Paradigm Shift

There may be little reason to believe that my conversations with friends and family who “stick to their guns” on the second amendment will generate the kind of creative solutions that will lead to a safer, kinder, gentler society, but if there is one thing that my experience tells me, then it’s that miscommunication will certainly derail us. If we are going to talk about this, then let’s at least start using the same language.

For example, it is being discussed in comments on my fb post, whether “guns are used for good,” and therein have their legitimation.  From the examples given, it appears that by “good,” my younger cousin means “provision” and “protection.”  (“Provision,” we will leave aside, since there is and can be no serious argument for the need to use assault weapons, or any firearms for that matter, to provide food for people).
By “protection,” I am understanding him to mean, “protecting what is perceived, at a given intersection of time, space and circumstances, to be innocent, human lives from intentions that are disagreeable: physical harm, death, exploitation and domination.”  Or, in other words, “protecting lives that are deemed more valuable over lives that are deemed less valuable.”   A gun in the hand of a potential victim, or 3rd party rescuer, then, is “used for good in that it can enable individuals to instantaneously become prosecutor, judge, juror and executioner, preserving the innocent and eliminating (or in best case scenarios, intimidating) the guilty perpetrator.  I think that is about the extent of the “good” that firearms are able to do in this world.  They don’t heal sickness or disease.  They don’t educate our children.  They don’t help us to connect with each other as a communication devise, means of transport, or language does.  They don’t produce loving families or meaningful community.  They don’t provide shelter, keep us warm and clothed or cool and shaded.  They don’t alleviate discomfort or make us more attractive.
Their “goodness” is at best, a very limited “goodness,” which is highly subjective, is contingent upon the convergence of multiple other factors to even qualify for a “goodness nomination,” and comes with enormous collateral damage.  The idea of a guns goodness  comes only, if at all, in a worst case scenario as a necessary last resort, rather than as some purely neutral object that “can be used for good.”

Closely connected to the, “guns can be used for good,” language, is the “guns are not evil, people are,” slogan.  “Guns don’t kill, people do.”  This is clearly a misnomer and a confusion of categories.  When I am pleading with my fellow citizens, friends and family to limit the production, sales and distribution of firearms, I am not doing so because I believe a machine gun has “moral agency,” which is a prerequisite for “being evil,” but because I know that guns, any guns, but some even more so than others, are extremely powerful objects, and therefore potentially more dangerous than other inanimate objects.  There is a moral argument to be made, but first, when debating about the objects themselves, our arguments fall into the category of pragmatism.  These inanimate objects are powerful and dangerous and carry a greater potential for harm than a sofa does.  That is why if there is someone who is mentally ill, violently enraged, or morally decrepit in the house, we might not be able to heal, medicate, assuage or convert the person, try as we might, but we would be wise to remove objects that carry a greater potential for harm from the vicinity, even as we continue our efforts to address the human factor of the equation.  This is exactly what Lisa Long did while confronted with the violent threats and behavior of her aggressive, mentally ill son.  She packed up all the knives in a Tupperware box and carried them around with her, all the while doing everything to get the medical/psychological help her son needed.  Exactly because the human element is so precarious… the one says “fallen, sinful man,” the other says “potpourri of mental/emotional/social disfunction”…, that we would be pragmatically wise to limit the availability of these singularly powerful and dangerous inanimate objects with potentially devastating consequences.
So, when speaking about the actual firearms themselves, it makes more sense to me to use language that designates them as powerful and dangerous, rather than not evil/evil, and then to ask ourselves, “what are wise, pragmatic (effective), and humane ways to halt the injuries and fatalities that result from the availability, misuse and malicious use of these uniquely powerful and dangerous objects?”  Judging from the international statistics of civilian deaths by firearms, other industrialized nations seem to be doing a MUCH better job of this than the United States.  Not to even consider the reasons for their success compared with our utter failure, is foolish.

Third, it is time to call a spade a spade.   By suggesting that the best solution to checking the injurious and fatal potential of these uniquely powerful and dangerous objects is to increase their prevalence and make them more available and accessible throughout every aspect of our society, for every citizen (at home, at work, at school and at play), we are not safeguarding society, but unraveling it.  Feeling you have to drive around with a shotgun in your truck to feel safe from a possible violent attack is not self-defense, it is escalation.  If Peter has a stick, Paul feels he must have a bigger stick to feel safe.  Once Paul has a bigger stick, do you think Peter will be content to have the smaller stick? And so the endless arms race begins.  I understand the natural instinct to armer up.  I feel deeply empathetic to the plight of living in fear, as I have been there myself.  But I will not call a spade a diamond.  Arming preschool teachers with extremely powerful and dangerous weapons would not be a wise, pragmatic (effective) and humane way to halt the injuries and fatalities that result from the malicious use of these same dangerous objects.  It would be an escalation of an already alarming crisis in our country.
So, during our conversations, be aware that though someone might refer to the “need” to have a gun in the home or to carry concealed weapons to church, to the park, or to day-care as “protection,” I will always read that as “escalation.”  I am looking for ways to de-escalate the violence and fear in my country.  Do you think that together we might try to come up with some creative ways to make our country a kinder, safer, gentler place to live?