Ireland: Who Said That? 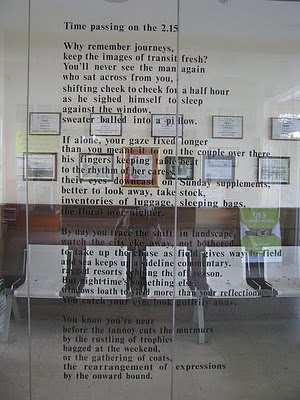 I can’t help but notice that the Irish seem to celebrate their writers and give homage to the written word. Little rhymes or quotes from literature kept winking at me from unlikely places. Above the seats on trains, at train stations, on the doors to restaurants. Some made me wonder if Dr. Seuss was Irish: “The seats are not for feet.” Or “Going to the game? Take the train!” But mostly the quotes caught me off guard and were in places I didn’t expect with no apparent context. Wrapped around a kiosk in Drogehda I read:

“You’ll never see the man again, who sat across from you,

better to look away.”*

and in the train:

“There was really nothing else to say

it was an awkward silence

I read the back of someone’s paper

I stared out the window.*

At first I thought it was just in Dublin, to attract tourists to the Writers Museum (exhibits @ Jonathan Swift, Oscar Wilde, Yeats, and Brendan Behan), the James Joyce Museum or the birthplace of George Bernard Shaw. But even as I left Dublin, I kept noticing these little epigraphs. As if Ireland was calling out, “have you read the works of our sons yet?” Upon hearing that C.S. Lewis, who was Irish, has been one of the most significant authors to me personally, an endearing Irish couple, during one of the breaks at the conference in Belfast, emphatically recommended that I read the Irish poet John O’Donoghue (which I intend to do, once I’ve finished the ten other books I’m in the middle of!). There are many more Irish writers that will join that list.

The Re-Emergent conference afforded another onslaught of words:

From Phyllis Tickle, a living religious encyclopedia, who used no notes and whose words went from her brain, through her larynx, and gushed out of her mouth at a freakish speed, I heard more than just the live rendition of her book, The Great Emergence. Words to put things into perspective, place ourselves in history and paint the grand scheme of things. Some disturbing words, some mind-boggling ones:

“We still have to answer the question, “What is a human being?”

“A big part of this new spirituality is happening in virtual space...with about 70 million people whose only religious experience is on the net in one of the 800 virtual churches.”

and bingo: “If you reduce God to a proposition that you can articulate, you just lost God!”

Samir Selmonovic’s words drew water, when he illustrated Miroslav Wolf’s stages of Embrace (Exclusion and Embrace) through a story of the exclusion and embrace from his own Muslim family, after his spiritual journey led him to follow Christ. That story can be found in his book, It’s Really All About God. Some of his words that stuck:

“The Emperor might be naked, but he has a very nice body...”

Beki Bateson, who I’ve quoted the most since I’ve been back:

“The kingdom of God is where Faith, Art and Justice intersect.”

As Christ followers, we should be “creating just spaces.”

“How do we move from injustice to justice? Exactly where we stand!”

“Art can help people imagine an alternative future and inspire them to actively move toward it.”

“the world is exploding in strangeness and it is causing us stress!”

conflict is “the failure to properly engage the other...”

“You are not a gadget”

That evening at the Black Box, IKON wove words together around the theme of choice... recited homespun words, gave us words to say in unison:

“We have been caught between

one thing and another

We have had to choose

and her uncertain brother.”

And then the words exploded with melody and rhythm and voltage, when first Vince Anderson and then Foy Vance took the stage. Foy Vance’s words were funny, melancholic, perceptive, personal and Irish. Being transported by his phenomenal music, they were often deeply affecting. By the end of his concert, he, like a pied piper, had corralled us all into the much smaller foyer singing these words over and over again as one big unpracticed choir,

The next day after the closing session and some time eating and conversing at Common Grounds cafe, I had the unexpected opportunity to hear words from the first and only female Justice on Britain’s supreme court, The Lady Hale of Richmond at the MacDermott lecture in the Great Hall at Queen’s University. Her words were about the pursuit of justice and the complexity of applying the law in discrimination cases.

“I’m here to talk about the neglected virtue: Equality.”

“At the current pace, it will take 75 years to close the gender pay gap.”

“...the Human Rights model is better than Anti-discrimination laws...”

As rich and delicious, moving and challenging, informative and thought provoking all of these words were, the words that left a truly indelible impression on me were spoken outside of the context of the Re-Emergent conference altogether. The words that, though I never wrote them down, keep grabbing my attention, purring their way into my stream of thought, like a cat who wants to be stroked, were spoken in what at first seemed to be a parenthetical adventure, a detour from the charted route. Words born out of a truly Irish experience, which I would like to tell you about in my next blog entry.

*(Can anyone tell me who the above quotes are from?)

well, i sure would have loved to be in ireland, but i looked after the family while lee was there. can't wait to hear more about the re-emergent conference.

The author of those lines is Nessa O’Mahony, who was born and lives in Dublin.

Her poetry has appeared in a number of Irish, UK, and North American periodicals, has been translated into several European languages. She won the National Women’s Poetry Competition in 1997 and was shortlisted for the Patrick Kavanagh Prize and Hennessy Literature Awards.

She was awarded an Irish Arts Council literature bursary in 2004. She completed a PhD in Creative and Critical Writing at the University of Wales, Bangor, in 2007. She is currently artist in residence at the John Hume Institute for Global Irish Studies at University College Dublin. She is Assistant Editor of UK literary journal Orbis.

Andy, you are a treasure!!
Originally I wrote the blog post with the line, "It seemed that Ireland was calling out, "have you read our sons and daughters yet?" But I took out "daughters" because I had only mentioned male Irish authors... and assumed, rather grudgingly, that the unknown quotes were probably from one of these male authors. How glad I was to find out that they were instead from Nessa O'Mahony... yes, an Irish daughter!