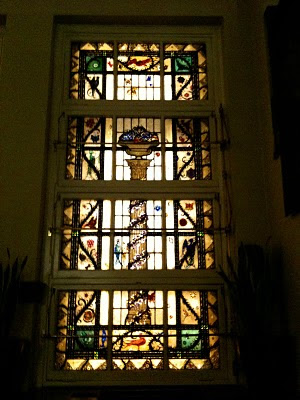 The Re-Emergence conference in Belfast was mainly my excuse to finally come to the magical land of Leprechauns. I have no explanation for why it has taken me this long to get to where I have always had a fancy to go (I’ve made it to England three times now, Australia twice, PNG and even Hawaii), but now that I am here, I have the silliest notion of needing to finish this sentence: “The Irish are _______.” I want to know who our people were, who Maggie was, who I am. And that in a mere five days!

Not knowing anyone in Dublin, my first whiff of Ireland came from my “chauffeurs.” Quite literally, the taxi I took from the airport to Skerries, just outside Dublin on the coast, smelled as if it might double as an escort service. The driver was unsure how to get to my B&B and was secretly using a navigation device, which he had on the seat between his legs. He could now afford to buy a more expensive cologne, because the ride cost me a fortune, double what I was told it would. The next day I took a train into Dublin and indulged in the Hop on, Hop off bus tour, which would have been out of the question had I been traveling as a family of five. Most of the drivers seemed to be auditioning for a stand up routine, peppering their tasty nuggets of Irish lore and factoids about historical landmarks with puns and punch-lines. One driver left out the lore and factoids and just told saucy one-liners about his “ex-wife.” Another tour guide told us that St. Patrick didn’t actually wear green. He wore royal and navy blue clergy colors. Green was, as Santa and his sleigh, thrust upon the religious holiday to make it more commercial, more appealing to a culture that was growing ever more secularized, a marketing scheme.

Looking for a place to have a coffee, I happened to walk into Bewley’s Oriental Cafes, which is home to Harry Clarke’s world renown stained glass windows. The building which once housed Whyte’s Academy, where the Duke of Wellington and Robert Emmet both went to school, became Bewley’s Cafe in 1927 and was the “hang out” for some of Irelands most famous literary and Artistic figures including Patrick Kavanagh, Sean O’Casey and Samuel Beckett. I was very pleased to hang out there and do some writing as well, and felt recompensed for not affording myself a glimpse of the Book of Kells, while I was at the beautiful Trinity College.

But for the architecture and the Guinness signs everywhere, the shopping district offers the same here as the world over: Gap, Gucci, Armani, The Body shop, McDonald’s and Burger King, with the later tempting me to forgo the culinary adventure of fish and chips. What frustrates me is that it seems no matter where I go in the world, I always find something American there. And indeed, in Dublin, anyone passing me by or sitting next to me in a cafe was as likely to have an American accent as an Irish one. The people waiting on me at my B&B, at restaurants, train stations, etc., however, had neither American nor Irish accents. They were mostly polish who had come over to earn money during Ireland’s economic boom and then go home again, but had gotten stuck when Ireland’s economy busted. It was a notable contrast to Belfast where it seemed everyone in service positions was Irish, and things were also less expensive.

My last stop of the day was in Malahide, another coastal town on the way out to Skerries. Getting there after the shops had closed, and having a bit of time before the next train and very tired feet, I stopped in at Duffy’s Pub after a quick walk down to the waterfront. Being too late to order something from the menu, I ordered a Becks (you don’t have to go all the way to Ireland to drink a Guinness, and drinking one in Ireland doesn’t make them taste better), and got out my little pink notebook. Of the 25 or so customers, there are five other woman besides myself. None of the men are younger than 45, rather quite over 50, white, with grey hair and casual, conservative dress. Malahide is obviously a notch or two above Skerries on the social scale. The bartender knows almost everyone in the house by name. They are all regulars except for myself and one other table. “These are the evening drinkers,” he responds to my question of whether the Irish drink a lot, or more than other folks; “ they’ll go home and then the night drinkers will come out.” He doesn’t know too many, that “drink straight through.” I understand him to mean that the Irish believe in moderation: they drink only once a day.

Now Lionel Ritchie is playing. The only place I’ve heard Irish music until now was in Burger King, where I stopped to use the restroom. I don’t spend a lot of time in bars now a days, so sitting here in an Irish pub, a horse race on the wide-screens, the salty sea smell of a coastal harbor town mingling with the savory sweet smell of malt, and this fill-in-the blank question gnawing at me like a dog on a bone, I am easily transported way back to the days when I did spend a lot of time in bars: as a little girl no older than six. The “Show Boat” and “Millie and Al’s,” were bars that my biological father, that precious Irish blood coursing through his veins, frequented daily. I’m guessing he didn’t have the knack for moderation, and am thinking he was more the “straight through” kind of drinker. Pistachio dispensers on the bar, dancing in front of the jukebox, gambling, poker games, trips to the horse races, the smell of fish and dirty water from the wharf in DC, large stuffed tuna and swordfish on the walls of Millie and Al’s, Shirley Temples (ginger-ale and grenadine with a cherry) were a few of the brighter spots of those years.

I sure would like to find some other traits to fill in the blank with, intriguing connections between the Irish and myself, more noble heirlooms that Maggie might have bequeathed to her American decedents, something worth salvaging from a family that shipwrecked on poverty, alcohol, crime and insanity. But I should be patient, this is only day two... I still have another three days to find out why being Irish is a bloody good thing. Ah... is that the theme music to “Shipping News” I hear.....

ah, well written. one day we both have to go to ireland and enjoy the irish culture: some good things come from ireland: u2, c.s. lewis, shackleton, irish music and landscape...